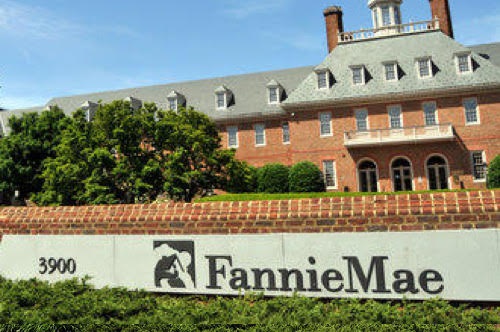 Fannie Mae, the largest financier of home mortgages, garnered much attention this spring when it announced it would loosen its credit standards beginning on July 29. The biggest change involves a move to accept loans from borrowers with a debt load of up to 50 percent of their gross income, compared with the prior 45 percent standard. This is known as the debt-to-income (DTI) ratio.

DTI is a big deal because it establishes a limit on how much a person can borrow. If the limit goes up, borrowers can potentially buy a more expensive house, or hold more credit card and auto debt along with their mortgage debt, and still qualify for a loan purchased by Fannie Mae.

Fannie’s move was praised by some housing analysts and trade groups like the National Association of Realtors (NAR) that say it will help first-time buyers and other creditworthy borrowers faced with fast rising home prices.

As a government-sponsored enterprise (GSE) whose loans are ultimately backed by American taxpayers, Fannie also received some blowback from groups that monitor credit risk for pushing the boundaries of what can be considered a safe mortgage.

Lenders and industry watchers say Fannie’s move is significant, but not necessarily for the reasons that have been reported. In the first place, Fannie’s DTI change doesn’t chart any new territory.

Freddie Mac, the competing GSE, has been willing to purchase loans from borrowers with 50 DTI since 2011. This standard has applied to all of its loans that are filed through their automated underwriting system. These represent the vast majority of loans purchased by Freddie Mac, according to a Freddie spokesperson.

Fannie Mae also has for several years been willing to purchase loans with DTIs above its 45 percent standard on a case-by-case basis, said Chris Castoro, executive vice president at Planet Home Lending, who previously worked for a large vendor that served Fannie and Freddie.

“This is more, in my mind, about clarification and codification than it is some new way of getting people in houses,” Castoro said.

What is significant about Fannie’s move, Castoro said, is that there now appears to be a bright line at 50 DTI as the outer boundary for borrower debt loads that both the GSEs will accept. Over time, as with the previous 45 DTI standard, that bright line may blur. The GSEs could begin accepting mortgages in the low 50 DTIs and debt loads will creep even higher.

Castoro said he doesn’t believe the 50 DTI standard will put the market at risk. He noted that the onus is on the lenders to do due diligence and avoid mistakes in their calculations. If an underwriter now makes a mistake on a DTI calculation, Fannie and Freddie likely won’t buy the loans, and lenders will lose money. He said he would be concerned, however, if DTI standards creep much higher.

Fannie and Freddie could begin to cherry pick the best borrowers who do not qualify for conventional loans now, and must obtain a so-called Alt-A loan at a higher interest rate as an alternative to GSE loans. Castoro said this could disrupt the Alt-A bond markets, which might be left with a riskier pool of borrowers.

“My concern is at what time does that become a fuzzy line,” Castoro said.

Other industry watchers generally praised Fannie’s move as a low-risk policy change that could give lenders more clarity.

“There is so much competition in the marketplace right now and origination volume has fallen off because we are swimming in a much shallower pond,” Chavira said. He noted that lenders don’t necessarily have to offer loans to borrowers with higher DTI. It just gives them more flexibility.

Not everyone agrees with the move to relax the debt-load limitations on borrowers, however. Greg Grandchamp, National Wholesale Lending Manager for Right Start Mortgage, Wholesale, said it could put more younger and first-time borrowers at risk of default.

“To see this [DTI] go up to 45 [was] probably not a bad thing,” Grandchamp said. “Now as we are edging up toward 50, then we are beginning to step over the line. That is at least my opinion, but I am not that guy who says, ‘Yeah, we have got to set guidelines so more and more people can buy homes.’”