These are the world’s most competitive economies...  USA #1

How well countries adapt to the Fourth Industrial Revolution (4IR) will determine whether they ‘thrive’ or ‘stagnate’ and could further divide workforces and increase social tensions, according to the latest version of the World Economic Forum’s Global Competitiveness Report.

Almost 40 years after its first annual assessment of the global economy, the Forum’s 2018 report uses new methodology to understand the full impact of the 4IR, and finds factors including human capital, agility, resilience, openness and innovation becoming increasingly important.
The new index measures 140 economies against 98 indicators, organized into 12 ‘pillars’ or drivers of productivity, to determine how close the economy is to the ideal state or ‘frontier’ of competitiveness.

The US topped the rankings, being ‘closest to the competitiveness frontier’, with Singapore, Germany, Switzerland and Japan, completing the top five. At the other end of the scale, Haiti, Yemen and Chad were found to be the least competitive economies.

Competitiveness is not only associated with higher incomes, but also better socioeconomic outcomes, including life satisfaction.
Explaining the new approach to measuring competitiveness, Thierry Geiger, Head, Research and Regional Impact, Future of Economic Progress at the World Economic Forum, said: “Productivity is the single most important driver of growth in 2018. With the Fourth Industrial Revolution in full swing, there is a need to rethink the drivers of competitiveness and therefore of long-term growth.
“Those new drivers include adaptability and agility of all stakeholders, including the governments. To what extent are they able to embrace change and adapt to change and upgrade their economies?”

Top of the index 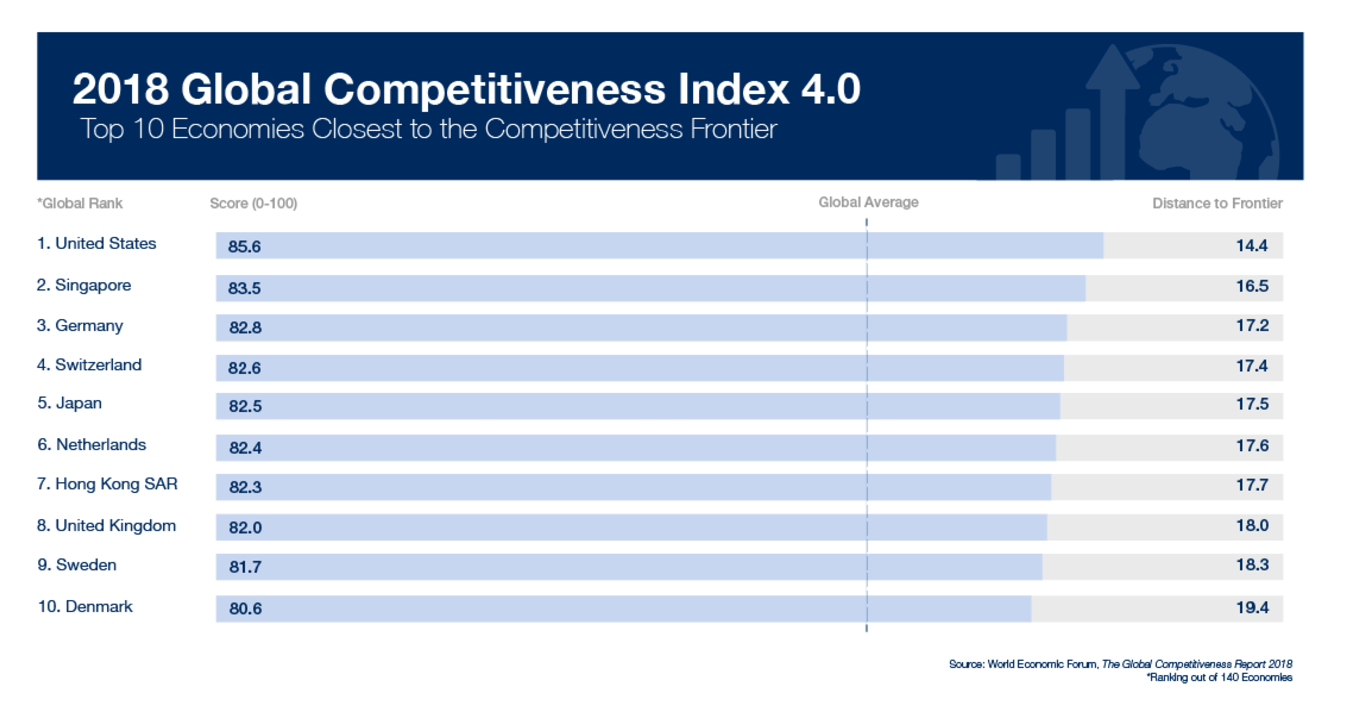 Its entrepreneurial culture saw it score highly in the business dynamism pillar. It also scored highly for its labour market and financial system.
But there were several areas which showed it still has more to do. It notably drops behind other advanced economies in the health pillar, with a life expectancy of 67.7 years, putting it in 46th place. And it was far from the frontier for checks and balances (40th place), judicial independence (15th) and corruption (16th).
The top 11 countries all score above 80 points for competitiveness. Second-placed Singapore (83.5) is defined by its high score for openness and it leads the way for infrastructure, with a near-perfect score of 95.7 for its world-beating transport system.
Germany, in third place, is the highest placed European economy for competitiveness, with particular strength in innovation capability (first place, with 88), business dynamism (82, second behind the US) and health (94). 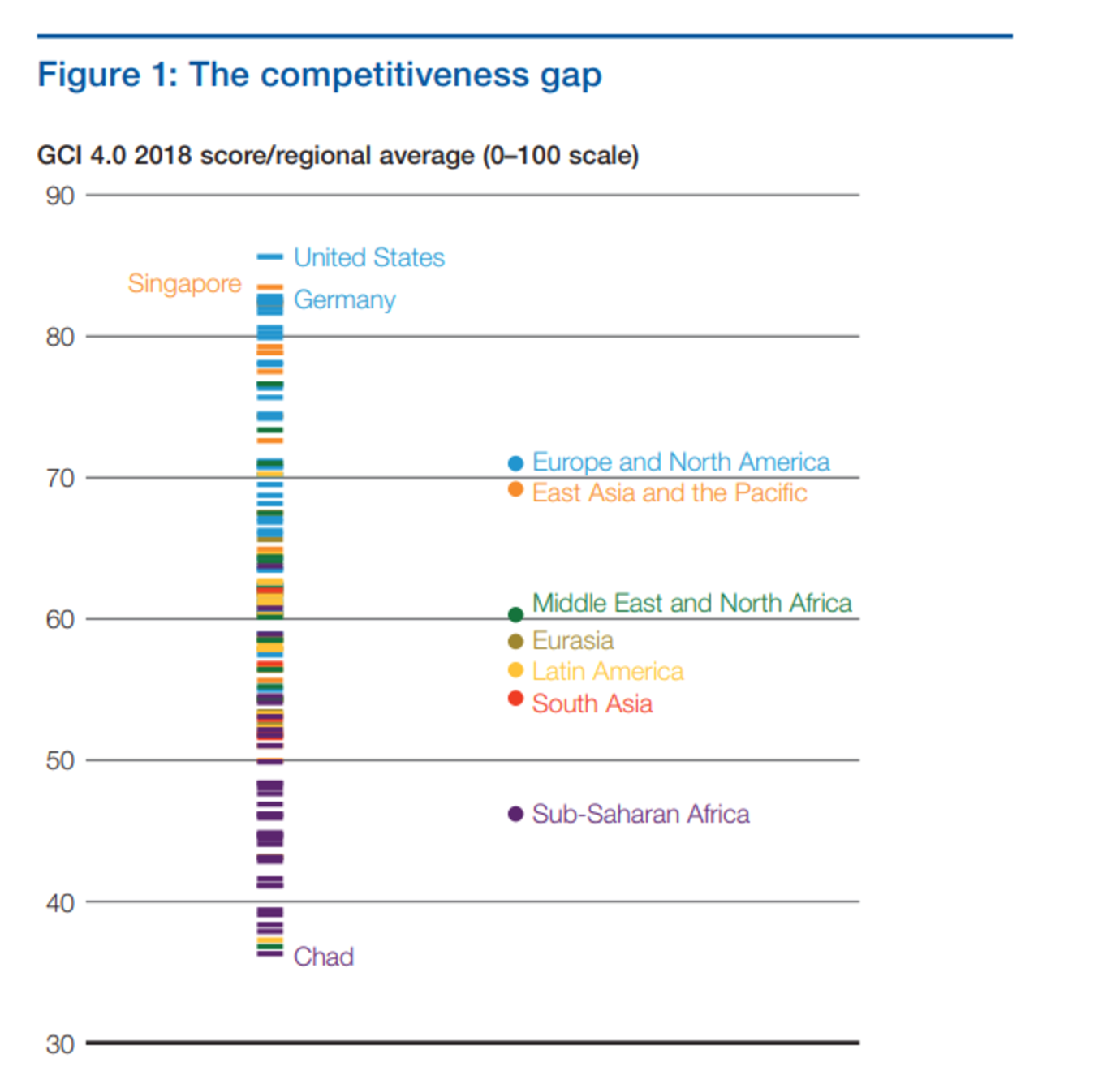 One of the key findings from the report is that all economies could do better in certain areas.

For example, while Singapore might be the most ‘future-ready’ economy, Finland outdoes it for having a digitally skilled workforce.
And while low and  middle-income economies can leverage technology to jumpstart growth, the report emphasises  the importance of ‘old’ developmental pillars, such as governance, infrastructure and skills.
Worryingly, of the 140 economies surveyed, 117 still lagged behind for quality of institutions, which impacted their overall competitiveness.
There was also a widspread  weakness at mastering the innovation process, with 103 countries scoring lower than 50 when it comes to following through from idea generation to commercial product.

A key message of the Global Competitive Index 4.0 is that there are no winners and losers - but rather, in the face of new technological challenges, countries can learn from each other.
“Competitiveness is neither a competition nor a zero-sum game - all countries can become more prosperous,” said Saadia Zahihi, Member of the Managing Board and Head of the Centre for New Economy and Society.

“With opportunities for economic leapfrogging, diffusion of innovative ideas across borders and new forms of value creation, the Fourth Industrial Revolution can level the playing field for all economies. But technology is not a silver bullet on its own. Countries must invest in people and institutions to deliver on the promise of technology.”

While everyone is speculating that our economy is going to crash...  manifested by naysayers!!  Our economy is doing great!

THE US ECONOMY IS #1

Now is a great time to get a deal on a property!

I am here to help with all your needs!!